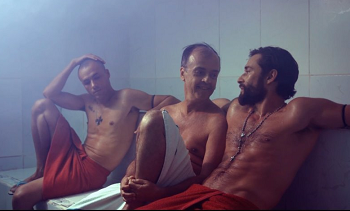 A male character looks for casual, no-strings-attached same-sex sexual encounters out in public, with the hook-up sometimes happening in public.

This is referred to as cruising

in gay slang/code. The term was coined in the '70s, though the practice is Older Than Dirt. While not exclusive to gay/bisexual men as heterosexuals partake in the same behavior, cruising has a history amongst queer men. Homosexuality and homosexual sex being either illegal and/or extremely discouraged by many societies drove men to get together with each other in secret in order to satisfy sexual needs. This happens in gay bars and gay hangouts, but also happens outside of those areas (as in outdoors). These areas are known as "cruising grounds" or "cruising spots;" they can be in the woods, or in the park, a public restroom (that specific form of cruising is referred to as "cottaging;" the term originated from the UK), etc.

Narratively, this trope is often used to highlight a character's promiscuity going against all reason or to highlight homophobia and public shaming of men who have sex with men in certain time periods as cruising stings were used to intimidate the LGBT community. The Armoured Closet Gay goes hand in hand with this trope as their feelings of gayngst and shame can drive them to cruising. As a counterpoint, the cruiser can be a sexually liberated character and can level accusations of Slut-Shaming towards those that would condemn him for looking for public fun.

As time marched on and the LGBT Rights movement gained momentum in many countries, cruising is no longer as prevalent as it was, at least in those aforementioned nations. Internet websites and queer male dating apps such as Grindr have mostly supplanted cruising. Not to say it has completely gone away; meet-ups can be arranged via those methods and old habits die hard.

This can lead to Sex in a Shared Room. Related to All Gays are Promiscuous and All Men Are Perverts.

This is not to be confused with a gay cruise, such as in the film Boat Trip.