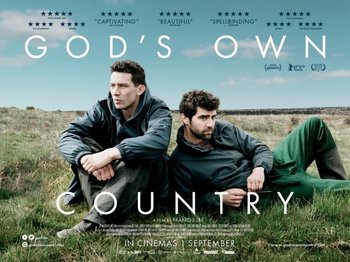 Brokeback Mountain of Yorkshire
God's Own Country is a 2017 British drama film written and directed by Francis Lee in his feature directorial debut. The film stars Josh O'Connor as Johnny, a young sheep farmer working on his remote family farm in Yorkshire, and Alec Secareanu as Gheorghe, a handsome young Romanian migrant worker hired to temporarily help during lambing season. The two slowly develop a romantic relationship.

This film contain examples of: