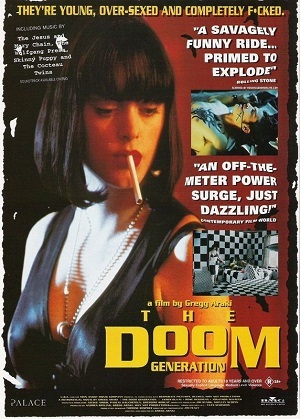 The Doom Generation is a 1995 film by Gregg Araki about Amy and Jordan, an angsty teen couple in Los Angeles, who are joined by a lovable rogue named Xavier. Their adventures lead them to commit a series of accidental manslaughters as several of the strange characters they meet mistake their identities and swear to kill them. Apparently a loose adaptation of Mark Beyer's black comedy comic strip "Amy and Jordan".

Tropes in The Doom Generation include: