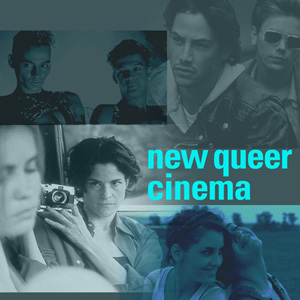 In 1992, a film scholar named B. Ruby Rich coined the term "New Queer Cinema" for a trend of films she'd been witnessing appear over the last few years. This movement was initially described as the independent and LGBT-themed movies of the early 1990s that were gaining popularity despite their transgressive form and content. Nowadays, the term is more loosely used to incorporate the queer-themed films from about 1989 in which, most notably, the characters don't have to end up dead or miserable to appease Moral Guardians or the Code: it refers to queer films that freely reject heteronormativity.

Many New Queer Cinema films incorporate elements of the Postmodern, especially because of their overlapping time periods and concern with deconstructing the normal. Many also draw from poststructuralism and the opportunities to reinterpret film form and meaning. While we're speaking of "post-s", New Queer Cinema is also a movement in queer history that is Post-Stonewall.

Originally, the key to the genre appeared to be a film's portrayal of protagonists who are somehow rejected by or rebelling against society, but not in an overtly political way. More recently the term has evolved, though. To wit, most independent, arthouse-type queer films would count, if made in the Anglosphere after about 1992 (accepted examples do start from 1989, being the ones that were used more to define the genre).

There's also the strange connection of many of the films being very heavy in dull shades of blue. This probably isn't a requirement as much as it is a common artistic choice.

The movement is seen as ongoing to about 2020, as by the later years of The New '10s queer films were becoming more inspired by New Queer Cinema than a part of it. Many of the popular New Queer Cinema directors also slowed or stopped their productions by this point.

Not to be confused with Queercore, a social movement spanning roughly the same period. Queercore is founded in punk music and is more outwardly angry towards society's homo- and transphobia; New Queer Cinema is obviously founded in cinema and is instead merely presenting alternative genders and sexualities in an equal or at least "real" light.