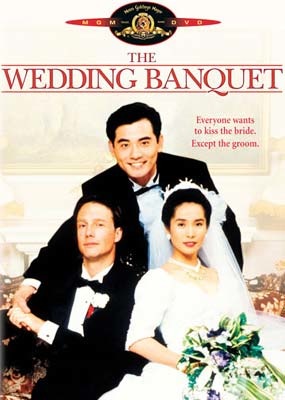 The Wedding Banquet is a comedy directed by Ang Lee and released in 1993. It was Lee's first exploration of the societal acceptance of homosexuality, and is the second part in Lee's Father Knows Best trilogy.

Gao Wai-tung lives a successful life in New York City: his business is thriving and he is in a happy relationship with his boyfriend Simon. The only problem is that his parents, who have stayed back home in Taiwan, ask him with increasing urgency when he's going to get married to a nice Chinese girl and give them some grandchildren. Fearing their reaction, Wai-tung has never told them about his sexual orientation.

In order to satisfy them, Simon suggests that Wai-tung engage in a marriage of convenience with Wei-wei, one of his tenants, a penniless artist from Shanghai who needs a green card. What none of them expected is that Wai-tung's parents would show up for the wedding. Now Wai-tung and Wei-wei have to go through the hassle of an elaborate traditional wedding ceremony, complete with lavish banquet and dozens of guests. After the banquet, a terminally drunk Wai-tung realizes that Wei-wei is having sex with him.

With Wei-wei now pregnant, and Wai-tung's parents staying weeks longer than initially planned, the relationship between Wai-tung and Simon becomes strained. Wai-tung's father eventually figures out his son's homosexuality, and gives Simon a red envelope, a symbolic admission of his status as Wai-tung's real spouse. Wei-wei, who was considering having an abortion, decides to keep the baby and to raise it together with both men.