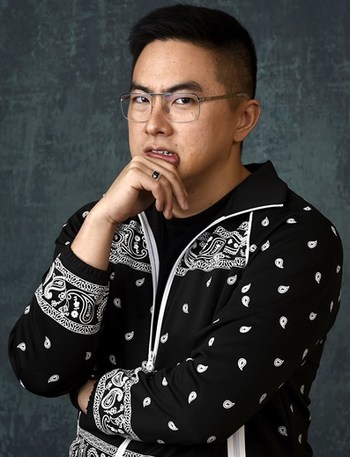 Bowen Yang (November 6, 1990) is an Australian-born American actor, comedian, and podcaster best known for being a cast member on Saturday Night Live. He joined as a writer for season 44 and was later promoted to featured cast in season 45. (Yang was actually voted "most likely to be a Saturday Night Live cast member" in high school.)

Yang's inclusion to SNL is somewhat historic, as he's the first Chinese-American cast member note though not the first Asian-American overall; Rob Schneider, Fred Armisen, and Nasim Pedrad precede him, as well as the first gay man of color in the cast note before Yang, the only LGBTQ cast member of color was Danitra Vance, a black lesbian. As of the 46th season, Bowen Yang became the first gay male cast member and second LGBTQ cast member overall (after Kate McKinnon) to stay on the show for more than a season. note (Terry Sweeney and John Milhiser each only lasted one season) Furthermore, he became the first featured cast member note as opposed to main cast, which is usually the case to be nominated for an Emmy Award in 2021, and the first Chinese-American to be nominated for an Emmy in any category.

In additional to SNL, Yang is also known for co-hosting the Las Culturistas podcast with Matt Rogers since it began in 2016.

Example of:
Forced Out of the Closet