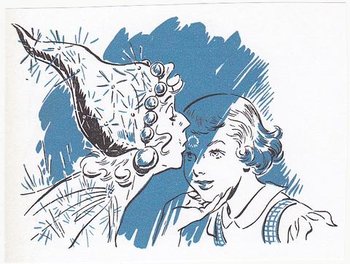 "Well," said Dorothy, "as far as Betsy and Hank are concerned, I'd like to have them here in Oz. It would be such fun to have a girl playmate of my own age, you see. And Hank is such a dear little mule!"
Ozma laughed at the wistful expression in the girl's eyes, and then she drew Dorothy to her and kissed her.
"Am I not your friend and playmate?" she asked.
Dorothy flushed.
"You know how dearly I love you, Ozma!" she cried. "But you're so busy ruling all this Land of Oz that we can't always be together."
— Tik-Tok of Oz
Advertisement:

Those two characters just kissed; they must be in love!

It's not necessary for the trope that the two characters be mistaken for romancing. It just has to be an informal kind of kiss between two characters who, because of their age, gender (or gender-mix), or social status, you wouldn't expect to see kissing non-romantically.

May happen between Platonic Life-Partners, PseudoRomantic Friendships or Heterosexual Life-Partners, particularly if one is The Not-Love Interest to the other. Kisses between family can count if they're past a certain (usually young) age than cultures see as "normal". They may also be kissing as a type of consolation, or perhaps just for practice.

In older works, two female characters (especially preadolescent and adolescent ones) in a Pseudo-Romantic Friendship will often kiss. This comes off as seeming homoerotic to modern viewers but at the time was simply meant to be a close platonic gesture.

The specific body part where it gets kissed also carries different connotations; I Kiss Your Hand, for example, can be a platonic sign of respect, particularly for young people towards their parents/elders, while kisses on face (especially mouth one) is more easily romantic unless the context makes it platonic (like, say, it's part of an act). See also Anywhere but Their Lips.

Truth in Television, and a minor source of Values Dissonance between cultures and time periods, some of which accept a lot more physical contact between non-lovers than others do.

If characters who aren't romantically involved are kissing to make it appear that they are, that's Fake-Out Make-Out. Also contrast Kiss of Distraction and "Shut Up" Kiss, where one of the parties might be more than platonically interested.