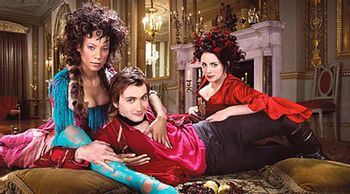 In 2005, the BBC made a three-part miniseries about the life of one Giacomo Girolamo Casanova starring David Tennant. The series is notable for sticking fairly closely to Casanova's actual memoirs.

The series was written by Russell T. Davies, of Doctor Who fame. Davies was so impressed by Tennant's performance that he cast him as the Tenth Doctor.