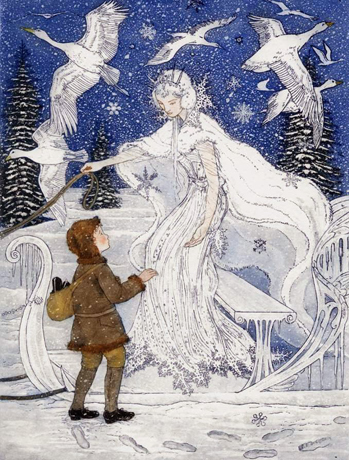 "The Snow Queen" (Danish: "Snedronningen") is a 19th century Fairy Tale by author Hans Christian Andersen which was first published in 1845.

An evil troll, actually The Devil himself, creates a magic mirror that magnifies all the bad and ugly aspects of whatever it reflects. He intends to carry the mirror into Heaven and make fools of the angels and God, but it slips from his grasp and falls down to earth, where it shatters into billions of pieces —- some no larger than a grain of sand. These splinters are caught onto the wind and occasionally lodge in the hearts or eyes of passers-by, causing them to see only the ugly in the world around them.

Years later, a little boy, Kai, and a little girl, Gerda, live next door to each other in a large city. Their grandmother tells them of the legendary Snow Queen, ruler of bee-like creatures made of snow. Shortly thereafter, Kai is struck by a shard of the mirror in the eye and heart. The next winter, the Snow Queen comes by in her silver sled, abducts Kai from the village square, carries him to her castle at the North Pole, and causes him to forget about his home. But once the snow has melted, Gerda sets out to find him, determined not to return without her friend.

Tropes associated with any adaptation that doesn't have its own page