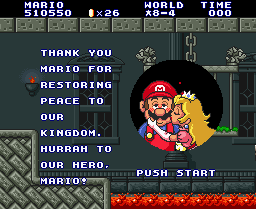 Just another Tuesday for Princess Peach.
"It's time I gave you a proper thank-you! Pucker up, handsome!"
— Flurrie, Paper Mario: The Thousand-Year Door
Advertisement:

Some men quest for glory, fame, and riches. Some men seek power and strength. Some want To Be a Master.

And some guys just want a kiss from the princess they're trying to save.

For some strange reason, princesses and other Love Interests seem to love giving out kisses as rewards for helping them. The smooch of victory is a standard part of the Rescue Romance, but it can appear in almost any scenario where a guy has the potential to impress a girl—either by winning a contest, saving her from a horrible beast, recovering her purse from thugs, or whatever the plot writers think up. The scenario generally goes like this:

May also occur in an After-Action Patch-Up, in which case she may merely acknowledge his courage first — or may berate him for stupidly getting into the matter first.

Usually, Bob is a Nice Guy, and he's perfectly content with receiving a kiss as his reward. If he's lucky, he might even get a full-on make-out session with the girl he just helped. If he's not... well, even a chaste kiss on the cheek is pretty sweet. Sometimes, though, Bob might be a lech who's only trying to help the girl in the hopes of lockin' lips with her. Thus, this is one of those frequently invoked tropes.

The most common ways to play with this trope are to have the kiss-ee not want the kiss, for some reason, and try his darndest not to get it. Alternatively, if he goes into the rescue or competition expecting a kiss, the girl at the other end may well refuse to give him one. The question of why it's desired if it's out of obligation, and thus doesn't actually mean anything, may not be addressed. A growing number of examples exists where both parties are the same sex, if only for the sake of a quick joke.

Note that in many historical settings, kissing an eligible member of the opposite sex is Serious Business; it may go all the way up to being tantamount to a marriage proposal.

Sometimes it might be unplanned or the victory coincides with the resolving of their UST. When prefaced with aggression, it's Slap-Slap-Kiss.

One of the most popular methods of Ship Teasing. Can overlap with The Big Damn Kiss if Rescue Romance is involved.