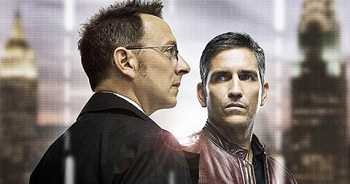 For once, you'll be glad that Big Brother Is Watching...
"You are being watched. The government has a secret system, a machine that spies on you every hour of every day. I know because I built it. I designed The Machine to detect acts of terror, but it sees everything. Violent crimes involving ordinary people, people like you. Crimes the government considered 'irrelevant'. They wouldn't act, so I decided I would. But I needed a partner, someone with the skills to intervene. Hunted by the authorities, we work in secret. You'll never find us, but victim or perpetrator, if your number's up... we'll find you."
— Harold Finch, Season 1 Opening Narration
Advertisement:

Person of Interest is a science fiction action-thriller TV series that started airing in September 2011 on CBS. It was created by Jonathan Nolan and developed along with J. J. Abrams and Bryan Burk. Prior to airing, it was much-hyped for the strong pedigree of cast and crew, and later the pilot received positive reviews. The show aired five complete seasons, wrapping in June 2016.

John Reese (Jim Caviezel) is a former CIA agent, reduced to living rough as a drunk homeless man in New York City after a falling-out with the United States government. He's bailed out of trouble with the NYPD by a mysterious billionaire named Harold Finch (Michael Emerson), who has a strange and potentially dangerous job offer. As it turns out, Finch is a software genius who designed the government supercomputer—"The Machine"—that monitors all surveillance and computer data, analyzing and filtering it in search of persons involved in potential threats to national security. When The Machine identifies one of these individuals, it transmits their Social Security number to the government.

As a side effect, The Machine also spits out "irrelevant" numbers that correspond to someone that it predicts will soon be involved in a violent crime which is not relevant to national security. To help these potential victims (or to stop these potential killers, as the case might sometimes be), Finch hires Reese, and together, they use their collective skills and resources to help innocent people.

In the process, they cross paths with two NYPD detectives: Joss Carter (Taraji P. Henson), who is initially an antagonist, investigating a number of violent incidents involving a mysterious "man in a suit" (Reese), but later begins cooperating with Reese and Finch; and Lionel Fusco (Kevin Chapman), an ambiguously corrupt cop who Reese ropes into helping him and Finch, helping him to redeem himself for his past crimes along the way.

Rounding out the cast of weekly rogues and "irrelevant numbers" is an ensemble of recurring characters, many of whom are important to the longer story arcs:

Please contribute to the character and recap pages.

Person of Interest contains examples of the following tropes:

"They Actually Built It"

Former NSA analyst Henry Peck explains his findings to Fusco, and comes to a terrifying conclusion...

"They Actually Built It"

Former NSA analyst Henry Peck explains his findings to Fusco, and comes to a terrifying conclusion...