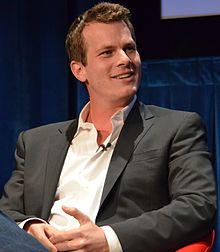 "Everybody is waiting for the end to come, but what if it already passed us by? What if the final joke of Judgment Day was that it had already come and gone and we were none the wiser? Apocalypse arrives quietly; the chosen are herded off to heaven, and the rest of us, the ones who failed the test, just keep on going, oblivious. Dead already, wandering around long after the gods have stopped keeping score, still optimistic about the future."
— Memento Mori

, a short story written by Jonathan Nolan which served as the basis for Memento
Advertisement:

Jonathan "Jonah" Nolan (born 6 June 1976) is a British-American author, scriptwriter, television writer, director, and producer, and the brother of Academy Award nominee Christopher Nolan. He often writes films with his brother since Jonathan wrote The Prestige alongside him in 2006.

Works Nolan is creatively involved with: