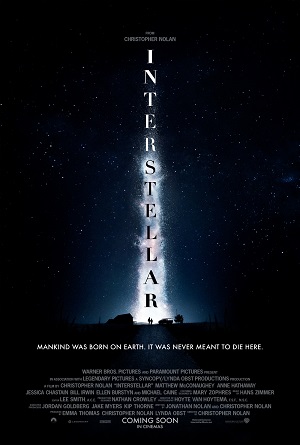 "We must confront the reality that nothing in our solar system can help us...we must reach far beyond our own lifespans. We must think not as individuals...but as a species. We must confront the reality of interstellar travel."
"We've always defined ourselves by the ability to overcome the impossible. And we count these moments — these moments when we dared to aim higher, to break barriers, to reach for the stars, to make the unknown known — we count these moments as our proudest achievements. But we lost all of that. Or perhaps, we've just forgotten that we are still pioneers, that we've barely begun, and that our greatest accomplishments cannot be behind us — that our destiny lies above us."
— Cooper, teaser trailer
Advertisement:

It is 20 Minutes into the Future and, though most either don't know or refuse to acknowledge it, Just Before the End. Many gadgets, machines, and substances once taken for granted are no longer cost-efficient or widely available and the world is experiencing a global Dust Bowl as one vital crop after another falls extinct to unstoppable blights. In this Crapsack World, widower Joseph Cooper, the last man to fly into space before NASA was disbanded, spends his days raising his gifted daughter Murphy and increasingly cynical son Tom with the aid of his aging father-in-law Donald, and his nights reminiscing on past glories — both his own and his civilization's.

And one day, his daughter's strange experiences with a "ghost" lead him to a secret government facility where he learns the Awful Truth: the blights are accelerating, and within a generation, they will not only destroy all food crops but render the very atmosphere un-breathable. But the good news is that NASA still exists in secret, and Professor Brand, his former mentor and now a high-ranking NASA leader, has a plan: to send one last crew of explorers through a wormhole in Saturn's orbit, in search of a team of scouts who claim to have discovered inhabitable worlds.

And as the only man left on Earth with actual experience in space, Cooper is uniquely suited to lead this mission.

Cooper: Everybody ready to say goodbye to solar system?
Romilly: To our galaxy.
Cooper: Here we go.
Feedback

Because it's close to a black hole, Miller's planet has giant tidal waves that will crush the protagonists if they don't return in time.

Because it's close to a black hole, Miller's planet has giant tidal waves that will crush the protagonists if they don't return in time.