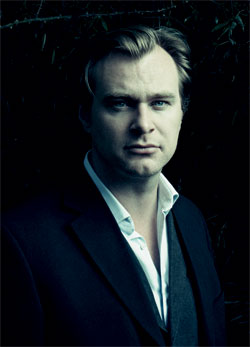 BRAVO NOLAN.
Influences:
"I think audiences get too comfortable and familiar in today's movies. They believe everything they're hearing and seeing. I like to shake that up."
Advertisement:

He is renowned for making Mind Screwy neo-noir movies, for reviving the Batman film franchise, for his persistent preference of film stock and Practical Effects over digital filmography and CGI, and for single-handedly ending the longest 3D movie craze yet by convincing IMAX to scale back new 3D presentations considerably

. The man clearly loves IMAX. In addition, he is a staunch proponent and advocate of the "theatrical experience" in an age where streaming and video on demand are all the rage.

His films tend to emphasize themes of obsession, deception, guilt, and Order Versus Chaos, and a number of them are driven by a man lying to himself or others to cope with grief. He is the brother of scriptwriter Jonathan Nolan, who frequently collaborates with him.

Films he has producing credits in:

Tropes usually applied in his works: