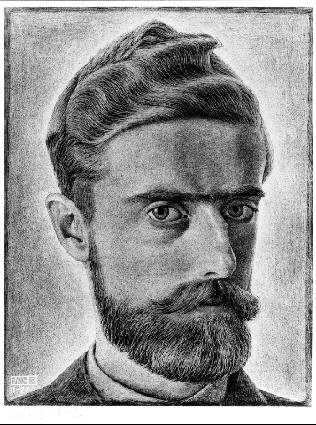 M.C. Escher (1898-1972, full name: Maurits Cornelius Escher) was a Dutch graphical artist whose art is known for being both mathematical in nature and brain-bending. Some common elements in his prints include:

, in which two hands are each drawing the other into existence, and Ascending and Descending

, a staircase which goes up or down forever (based on the Penrose Stairway

(Escher also happens to be a close contemporary of René Magritte, whose works also mess with the viewers' heads, though not in the same way.)

Contrary to the name, he was not, in fact, a rapper (though he is "Weird Al" Yankovic's favorite MC).

Often works through Perspective Magic. A lot of Alien Geometries are based on his work. For more information on his techniques, see Graphical Perspective.