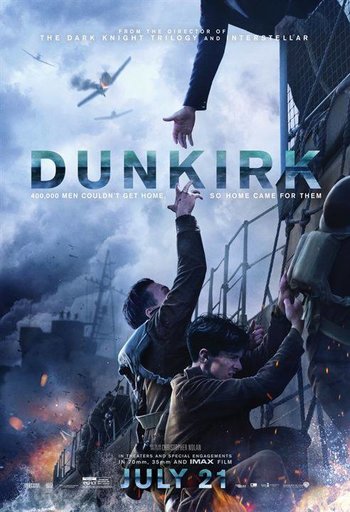 that could be sent there, as the armies were completely surrounded by German forces in the eponymous coastal city of Dunkirk ("Dunkerque" in French) after being completely outmaneuvered in Belgium following a surprise German offensive in Northern France.

The film is separated into three intertwining stories:

The cast includes Fionn Whitehead as BEF soldier Tommy, Harry Styles (in his acting debut) as Argyll & Sutherland Highlanders BEF soldier Alex, Aneurin Barnard as Gibson, Tom Hardy as RAF pilot Farrier, Cillian Murphy as a BEF soldier, Kenneth Branagh as Royal Navy Commander Bolton, Mark Rylance as Mr. Dawson, and James D'Arcy as BEF Colonel Winnant. It was filmed on the actual location, with some actual vessels that were used during the evacuation.

The announcement trailer can be viewed here

Compare the 1958 British film Dunkirk and the 1964 French film Weekend at Dunkirk.