Film / Each Dawn I Die 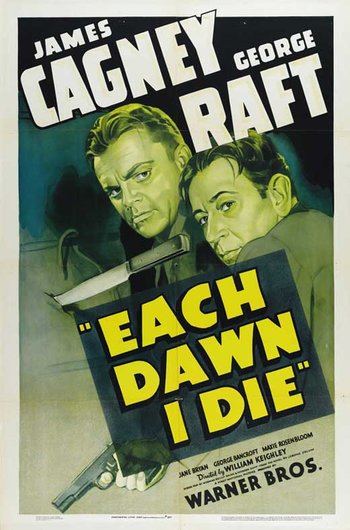 Each Dawn I Die is a 1939 crime film directed by William Keighley.

James Cagney stars as Frank Ross, an Intrepid Reporter. Frank is hard on the heels of one Jesse Hanley, the District Attorney and candidate for governor, and also a thoroughly corrupt crook. When Frank catches some of Hanley's goons burning incriminating documents, Hanley's organization decides that Frank has to be dealt with.

So they frame Ross for drunk driving by knocking him on the head, tossing him in a car, shattering a bottle of liquor in said car, putting said car in gear, and sending it off down a city street. It works even better than they'd hoped when the resulting wreck kills three people and Ross is sent to prison to serve 1-20 years for vehicular manslaughter.

Ross's newspaper buddies work on freeing him, but to no avail. Meanwhile, in jail, Ross makes the acquaintance of a criminal named Stacey (George Raft). After Ross does Stacey a favor, Stacey comes to him with an unusual proposition. If Ross will help Stacey escape from prison, Stacey, who has a lot of connections in the underworld, will find the men who framed Ross.