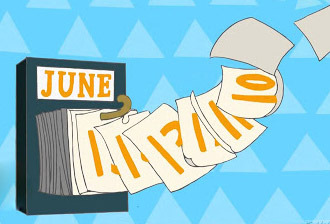 Summer days just breeze on by, don't they?
Time is flying like an arrow
And the clock hands go so fast they make the wind blow
And it makes the pages of the calendar go
Flying out the window, one by one
— They Might Be Giants, "Hovering Sombrero"

A method used to show the passage of time by repeatedly flipping/tearing off pages of a calendar. It's most often seen during Montages.

A variation is several shots of calendar pages with consecutive days marked off by large X's to show progress toward a specific, final day which is marked with a large circle.