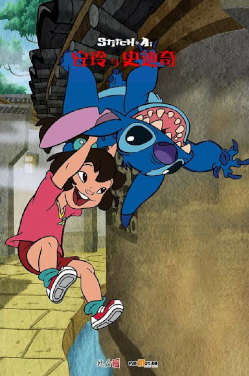 Another new land, another new family, and still no Lilo.

An unprecedented third TV series for a Disney Animated Canon-based franchise, and Disney's entrance to the Chinese animation market, Stitch & Ainote 安玲与史迪奇; Ān líng yǔ shǐ dí qí; literally "An Ling and Stitch" (2017) is another Spin-Off of Lilo & Stitch. This Chinese animated series, produced by Anhui Xinhua Media and Panimation Hwakai Media, has a similar premise to the Stitch! anime before it, as Stitch is again separated from Lilo Pelekai and ends up in a different region of Earth. However, unlike the anime, this show had the assistance of American animators (including Lilo & Stitch: The Series executive producer Tony Craig serving as director) and was produced in English first before being dubbed into its local language (Mandarin Chinese).

Set on a timeline that takes place after the events of Leroy & Stitch,note whether it takes place on the same timeline as the anime is ambiguous, but this show was produced without any consideration towards the previous one Stitch is kidnapped from Lilo by a gang of space criminals known as the Jaboodies, who wanted to replicate Jumba's Experiment 626 research after hearing about information hacked from Jumba's computers about an ability that was programmed into Stitch that makes him even more destructive than what was known before, but they failed to do so themselves. A rival gang, the Woolagongs, attacks their ship wanting Stitch for themselves, allowing him to break free and escape back to Earth in the confusion. Upon reentering Earth's atmosphere, he lands in China's Huangshan mountains where he meets Wang Ai Ling, a young Chinese girl who lives with her older sister Jiejie in the mountains. The two sisters' aunt Daiyu wants to take Ai out of the mountains and into the big city, believing that Ai would develop better as a person there, but the mountain-loving girl and her sister are resistant to the idea. As Stitch—along with Jumba and Pleakley later on after they are sent to China by the United Galactic Federation—joins Ai's family, the two help each other deal with their problems; Stitch helps Ai stay in the mountains, while she helps him ward off the two gangs who are still going after him.

Oh, and as for the experiments that have been featured in the first two shows, Stitch's predecessor "cousins" don't show up this time. However, Jumba gets inspired by what he reads on ancient Chinese scrolls and creates several new experiments

based those found in Chinese Mythology.

The series made its English debut on Disney Channel Asia on February 5, 2018,

and all thirteen episodes of the show aired throughout that month. The series made its American debut on the DisneyNow service on December 1, 2018, with all but the ninth episode ("The Phoenix") released for free viewing for everyone living in the United States, including those without a TV provider. However, it was removed from the service by June 2019.