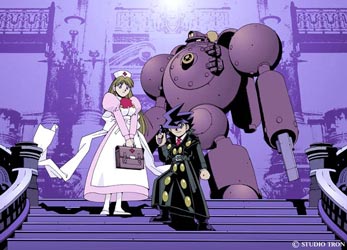 Steam Detectives is a manga by Kia Asamiya, who created it for his son. It was serialized from 1994 to 2000, starting out in Monthly Shonen Jump before moving to Ultra Jump in 1996.

The scene is Steam City, a London-ish city which represents an entire civilization run by coal and steam power. Because of steam, the city is sometimes covered in a mist. Villains take advantage of the steamy mist to hide and execute their evil plans.

Only a few dare venture into what's beyond the steamy mist. They are known as the Steam Detectives: Narutaki, his nurse-assistant Lingling, and his Megamaton robot Goriki.

It was later adapted into a 26-episode TV anime series produced by Xebec, which aired from 1998 to 1999.