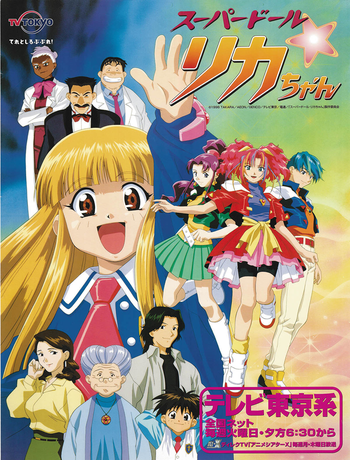 Super Doll★Licca-chan is a televised Anime series directed by Gisaburō Sugii from studio Geneon and featured on TV Tokyo. The 52-episode TV series aired in Japan from 6 October 1998 through 28 September 1999, and has been translated into multiple languages including English, Chinese, Spanish, Italian and Tagalog. The Anime also inspired a serialized Manga of the same name produced by publisher Kodansha in its monthly Manga magazine Nakayoshi.

The series was inspired by the long-selling and popular Takara doll lineup Licca-chan (considered by some to be the Japanese equivalent of Barbienote Which is also available in Japan). The Anime was designed to serve as a means to adapt their line of dolls and create a line of action figures. However, the new figures were only a mild success, and did not remain in production for long.

The story of the anime follows an ordinary elementary school girl named Licca Kayama.note Takara's official full name for the doll. It details the strange circumstances surrounding her origins, and also delves into the origins of her protector, Doll Licca. Licca herself descends from a long line of defenders of the Fantasy Kingdom, from which all our fairy tales originate; she and her family must use three super powered dolls (Doll Licca, Doll Isamu and Doll Izumi), along with the help of her friends, to thwart the machinations of Professor Scarecrow and his minions.