Anime / Stellvia of the Universe 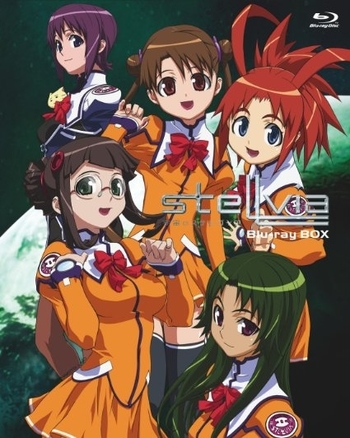 Clockwise from top-left: Ayaka, Shima, Arisa, Akira, and Yayoi
"I want to see the stars while looking forward, rather than having to look up."
Advertisement:

Stellvia of the Universe is a Science Fiction anime television series produced in 2003 by studio XEBEC and directed by Tatsuo Sato of Martian Successor Nadesico fame. Despite its After the End setting, it carries strong utopic message and bright optimistic belief in humanity while also displaying deep insight into human psychology, showing how true unity can only be achieved in the presence of a common goal and how it starts falling apart once it's gone, only to return again when needed. Geneon's DVD releases were discontinued in North America when they went under, among dozens of others, though Discotek Media managed to rescue it for a Blu-Ray release.

In 2167 CE, the shockwave of Hydrus Beta gone supernova reached Earth and brought about The End of the World as We Know It. Almost two centuries later, humanity managed to restore much of its civilization and although Earth remains severely underpopulated, the scientists discovered a new threat to the planet as well as means to counter it. A second shockwave, now carrying physical remains of the Hydrus star system rather than just radiation, is on its way to the Solar System. To deflect it, humanity has built enormous space stations called Foundations to span gigantic energy shields over Earth and other inhabited planets until it passes. This is the Great Mission, the ultimate achievement of mankind and the greatest hope for its survival.

In the year 2356, Shima Katase and her friends enroll at the space academy on Stellvia, the Foundation assigned to Earth. Eventually, despite being mere first-years, they become the ones to confront the second shockwave and defeat it. However, the Great Mission is just their first step on the rocky path to the distant stars...

Example of:
Everybody Cries