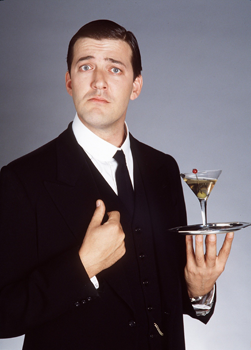 Zany Schemes abound, but Stephen Fry barely lifts an eyebrow.
Ever notice a lot of butlers are named Jeeves? You know, I think when you name a baby "Jeeves"... you've pretty much mapped out his future, wouldn't you say? Not much chance he's gonna be a hitman, I think, after that. "Terribly sorry, sir, but I'm going to have to whack you."
— Seinfeld, "The Pilot Pt. 2"
Advertisement:

The Jeeves is the perfect British butler, valet, or manservant. Always well-dressed, unfailingly polite, devoted to his employer... and usually much smarter or more level-headed than his employer, too. Usually can manipulate him so subtly that he does not even have to speak With Due Respect to achieve his ends.

The canonical example is Jeeves himself, from the Jeeves and Wooster short stories and novels of P. G. Wodehouse and the Jeeves and Wooster TV series based on them. The original Jeeves, just for the record, is a valet, not a butler — that is, he's a personal manservant, not a chief of domestic staff; as a bachelor living in a flat, Wooster doesn't have the kind of staff to warrant a butler. (Though all that said, if the call comes, Reginald Jeeves can buttle with the best of them.) The same is true of many examples of this trope, as the two roles are commonly confused.

A somewhat common inversion, which began while Wodehouse was still writing, is to have the butler as a brutish thug (and possibly a Battle Butler). Both the original and the inversion are examples of an actually useful kind of valet taken to the logical extreme. After all, if an aristocrat is in fact foolish and incompetent, then a competent valet is an urgent necessity if they are to survive everyday life. Conversely, an aristocrat may find it useful to have a brutish thug on retainer to deal with certain... inconvenient problems.

Note that The Jeeves, even if a valet, is not prone to the No Hero to His Valet plot, generally having a clear view of his master's faults and virtues, though he may, on occasion, allow his view of the former to jaundice his view of the latter. Usually a Hypercompetent Sidekick and often a Servile Snarker (the original was both). Complete opposite of the Bumbling Sidekick.

If the Jeeves should appear in a work of Mystery Fiction, expect copious Lampshade Hanging on the idea that The Butler Did It.

Mayor Bourgeois's butler, who leads Cat Noir to the royal suite and brings him Camembert.

Mayor Bourgeois's butler, who leads Cat Noir to the royal suite and brings him Camembert.