No, Mr. Bond, I Expect You to Dine 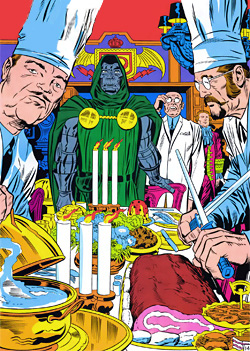 "Now that I have you in my clutches, prepare for your... dinner!"
Dr. Evil: Scott, I want you to meet Daddy's nemesis, Austin Powers.
Scott Evil: What? Are you feeding him? Why don't you just kill him?
— Austin Powers International Man Of Mystery
Advertisement:

The villain has the hero at his mercy, surrounded by armed goons. Does he just shoot him? Of course not. Does he take the hero prisoner to be strapped into an improbable torture device (from which he will immediately escape)? No, that comes later.

Instead, for a time, he treats the hero as a close friend and guest in his home, giving him a plush bedroom and a fine (if tense) dinner with A Glass of Chianti and the hero's favorite meal, made from ingredients grown in the villain's garden. If the food isn't spiked, the meal ends with a tour of the facility, then a sales pitch on the villain's scheme to remake the world Just Between You and Me. The hero will reply "You're Insane!" — and that's if he's polite. If he isn't, saying "I'm Not Hungry" dampens the festivities quite early. The hero might attempt to steal a Cutlery Escape Aid during the meal.

This differs from general Affably Evil villainy. Treating the hero as a guest is a demonstration of unassailable power, confidence and civility. It's not quite Go-Karting with Bowser, as it ratchets up the tension with the ever-present threat of unpleasantness should the hero step out of line — the conflict's not just a game. Nor is this Did We Just Have Tea with Cthulhu?, which requires the villain to be genuinely friendly rather than just faking.

With the loonier sort of antagonist, the hero is forced to play along as the villain thinks the hero is his best friend and insists they act as such.

The hero may be provided with formal dining attire: a tux for the gent and a good-looking, well-fitting dress for the lady, with a bath if needed. This may explicitly be so the villain can ogle her. It will almost certainly be so that the audience can watch her kick his butt in said dress later. If the hero's family are present, this can lead to an amusing case of Villain Over for Dinner.

The paraphrased trope namer is the James Bond villain Goldfinger, who did later feed Bond. Also subverted the trope, as Goldfinger was initially going to simply kill Bond, before James bluffs Goldfinger into letting Bond live. These feasts are common in Bond films, which only really subverted it once. (see below)

Compare and contrast Captive Date, where one side of a romantic evening would rather not be there but isn't allowed to leave, and Enemy Eats Your Lunch, which is when one of the sides isn't keen on sharing food but the other takes it anyway.

Also compare and contrast Sacred Hospitality: The villain usually plans to torture the hero after the meal, or place him in some horrible death-trap. He is explicitly offering the hero the protection of guest-right but fully intending to violate that protection immediately thereafter. The villain thereby reveals himself to be totally without moral or ethical scruples.

The discount version of this trope is Kidnapper's KFC, when a kidnapper can only afford fast food for himself and his hostage because he's running from the cops.

Alternative Title(s): No Mister Bond I Expect You To Dine