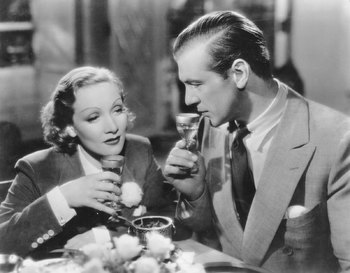 Dietrich plays Madeleine, a jewel thief. After executing a clever scam and absconding from Paris with a pearl necklace worth 2.2 million francs, Madeline flees for the border with Spain ahead of the police. Also heading for Spain is Tom (Cooper), an American auto engineer on vacation. A Meet Cute near the border is followed by Madeline slipping the pearls into Tom's coat to avoid being caught with them at customs. After they make it into Spain Madeline steals his car, only to realize that Tom's coat was in his suitcase, which he kept. Tom for his part wants to find the lady who stole his car, and eventually tracks her down to the sea coast resort of San Sebastián. Naturally, romantic sparks fly.