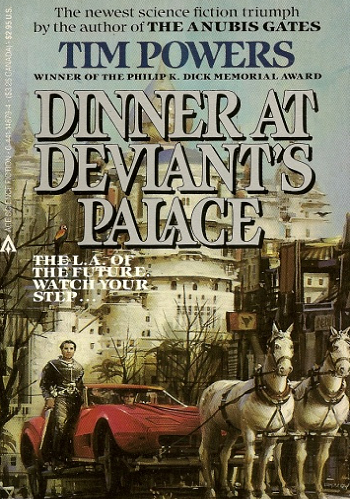 Dinner at Deviant's Palace is a science fiction novel by Tim Powers, first published in 1985.
Advertisement:

In a post-apocalyptic Scavenger World California, Gregorio Rivas is a musician with a past. The son of a tenant farmer, he was thrown out by the landowner after hooking up with the landowner's daughter, fell in with a predatory cult, won free, and started making a living as a musician in the licentious city of Venice, in the shadow of the notorious Deviant's Palace. After moving to the more respectable walled city of Ellay, he started getting occasional work as a "redeemer", rescuing youngsters from the clutches of the same predatory cult, and built a reputation as the best in the business before retiring to focus on his musical career.

When Rivas is approached by Irwin Barrows, the man who kicked him out all those years ago, to perform one last redemption, he knows he can't refuse: Rivas has never got over Barrows' daughter, and it's Urania who is now in need of rescue from the Jaybush cult.

Rivas's quest will take him where no redeemer has dared go before: not only up to the very walls of the cult's fortress, the Holy City, but inside them — and then beyond.