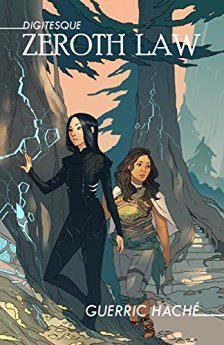 "And for a thousand years, we mostly used these wondrous gifts to fight over scraps of power in a world that was slowly, imperceptibly, being swallowed into nature and forgotten. Well... It's time to remember."
Advertisement:

Humanity has fallen from the lofty heights of the past. Their creations remain, robots and upgrades that benefit their primitive descendents, but so much has been lost.

Isavel was ungifted, someone who came to age without manifesting a gift. When raiders attacked her village, there was nothing she could do, and she was slaughtered along with everyone else... until she woke up, and found that she somehow had two gifts now. But the raiders aren't entirely gone, and there is something very strange about them.

Ada is a coder, kicked out of the Institute for daring to delve deeper into the secrets of how the mysterious code worked. She finds the primitive villages to be annoying at best, but a peasant boy takes her to an ancient ruin that strains her talents.

The two girls separately find themselves caught up in a war between ghosts, aliens, and ancients, trying to find some way to save everyone. Isavel just wants to follow the will of the gods—whatever that might be—while Ada wants to prove that there is more to humanity than scrambling about in ignorance.

The series consists of six books:

This novel series provides examples of: