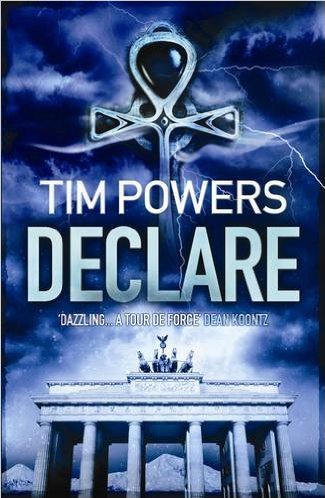 Where wast thou when I laid the foundations of the Earth? Declare, if thou hast understanding.
—Job 38:4
Advertisement:

A 2001 spy novel by Tim Powers, Declare follows British agent Andrew Hale through a covert Cold War operation with roots in the intricacies of the Great Game and a distinct supernatural bent. It is written as a Secret History, postulating that there are supernatural events occurring behind the scenes of otherwise-mundane occurrences. At its center: the British spy and defector, Kim Philby, and his links with the djinn...

Powers has acknowledged that much of the novel was influenced by the works of John le Carré, while the supernatural occurrences have a distinct Lovecraftian flavour to them. See also Charles Stross's Laundry novels; in the afterword of the first novel Stross admits the similarities—the Stale Beer-flavoured spy fiction, and the secret knowledge of the supernatural—but notes that they are coincidental.