Literature / The City of Brass 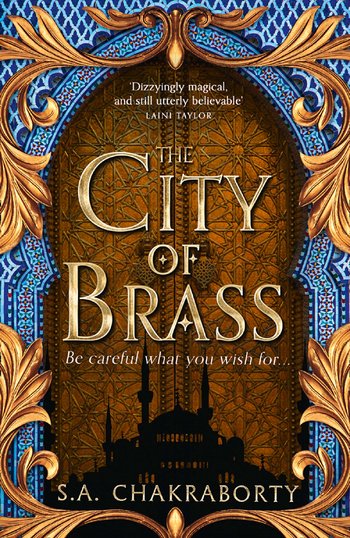 The City of Brass, by S.A. Chakraborty, is the first book in the Daevabad trilogy, a series that breaks with the tradition of Medieval European Fantasy novels by being distinctly Middle Eastern. Most of the characters, even nonhuman ones, are devout Muslims, and much of the story takes place in a hidden magical city in the highlands of central Asia.
Advertisement:

Nahri has never believed in magic. Certainly, she has power; on the streets of 18th century Cairo, she's a con woman of unsurpassed talent. But she knows better than anyone that the trade she uses to get by— palm readings, zars, healings —are all tricks, sleights of hand, learned skills; a means to the delightful end of swindling Ottoman nobles.

But when Nahri accidentally summons an equally sly, darkly mysterious djinn warrior to her side during one of her cons, she's forced to accept that the magical world she thought only existed in childhood stories is real. For the warrior tells her a new tale: across hot, windswept sands teeming with creatures of fire, and rivers where the mythical marid sleep; past ruins of once-magnificent human metropolises, and mountains where the circling hawks are not what they seem, lies Daevabad, the legendary city of brass, a city to which Nahri is irrevocably bound.

The second book in the trilogy, The Kingdom of Copper, was released in early 2019.

The third and final book, The Empire of Gold, was released in June 2020.