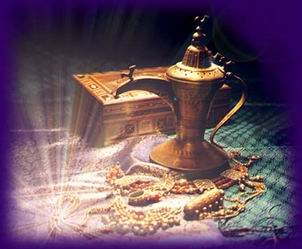 "You must learn how to leave your audience in suspense."
"They lived happily until there came to them the One who Destroys all Happiness."
Advertisement:

The Arabian Nights, also known as The Tales of One Thousand and One Nights (Farsi Hezār-o yek šab, Arabic Kitāb 'alf layla wa-layla), is a massive collection of Fairy Tales drawn from sources as far apart as the Middle East, North Africa, India, and, to an extent, even China and Greece. It has for centuries shaped the European view of the [relative to Europe] "(Near) East" or "Orient", even though only some of the stories are widely known. Jinn, evil wazirs and flying carpets all stem from its pages.

In fact, early Arabic-language versions only contain about 300 nights. The 701 others were added later; most of the additions were by Arab writers, but European translators added some other folktales they'd collected in their editions. Some of these additions were based on other Arabian sources, but others, including Aladdin and Ali Baba and the Forty Thieves, were stolen by Antoine Galland (the French translator) from Syrian Maronite writer Hanna Diyab, who recounted those tales to Galland and based them on various aspects of his own life. Diyab's autobiography was found in 1993 and greatly expanded our understanding of these stories. More on this in the Other Wiki.

The Framing Device for the story cycle is the tale of King Shahryar and the lady Shahrazad. The King's first wife had cheated on him, so he had her executed. Then, feeling that no woman could be trusted, he hit upon a plan only a powerful and insane tyrant could pull off: he'd marry a woman, spend the night with her, and then, in the morning, send her off to the royal Wazir (chancellor) to be executed. No woman would ever betray him again!

After a great many wives were executed in this manner (Richard Burton's translation says the King did this for three years, which would be about 1,100 wives), the Wazir was running out of marriage prospects to present to the King. Then the Wazir's daughter, Shahrazad, came to him with a plan. Since her plan involved marrying the King, the Wazir objected in the strongest manner possible, but nothing would deter the girl, and finally he brought her to the King.

Come the wedding night, once he started putting the moves on her, she feigned becoming upset, and pleaded to see her younger sister one last time. The King acquiesced, and allowed Shahrazad's sister, Dunyazad, to stay in the room with them until dawn. Even while they consummated the marriage. Awkward. After that and the three of them went to sleep, the sisters woke up at midnight. Just as planned, Dunyazad asked Shahrazad to tell her a story, but by the morning she was not finished, and ended the story on a Cliffhanger. The awoken King was so hooked on the story that he postponed the execution for one night, in order to hear the rest. But after Shahrazad ended that story, it was still the middle of the night, and she started up another story, again ending on a cliffhanger in the morning.

The nightly routine continued. Some of the stories were simple, some complex and multi-layered; sometimes a character in one story would begin to tell a second story, and sometimes the story was never actually ended because Shahrazad had gone on two or three layers and never returned to wrap up. Or sometimes she claimed she didn't know the ending, but had another tale that was even more intriguing than the unfinished one. But all of the stories were so compelling that the King could never bear to order her execution without hearing the ending.

So Shahrazad kept up the stories for three years — in the meantime bearing Shahryar three sons — and finally, after 1,001 nights, she said that she had told all of her tales and was ready to die. But the King had fallen in love with her, and had been calmed by her entrancing stories. He declared that no woman in the kingdom was as wise as Shahrazad, and he made her his queen for keeps this time, and they lived Happily Ever After.

From the 1,001 Nights, the three best known stories are "Ali Baba and the Forty Thieves," "Aladdin" and The Seven Voyages of Sinbad, which include tropes traceable to Homer. All three have been filmed, and many other movies draw on the Arabian Nights.

Unlike many legends, which deal primarily with the deeds of the nobility (who, after all, were the ones who could afford to have a bard as a permanent resident at their palaces), Arabian Nights has the fascinating twist that it covers people from myriads of occupations in a highly-complex society.

Lesser known, but no less interesting, stories from Middle Eastern folklore are the Arabian Hero Cycles.

A note on canon:

As noted above there is no definitive canon to the Arabian Nights, as the list of stories was expanded by various writers over centuries. This list of tropes is based for the most part on the famous 19th century Richard Burton translation, which is in the public domain. Several versions, including the entire Burton version, are available on Kindle at Amazon or otherwise available for download, for free or less than a dollar. Project Gutenberg also has a free copy. Make sure to get one with an active table of contents; for that is extremely useful for this. In 2012 Penguin Publishing released a new three-volume English translation by Malcolm Lyons. It used the same source as the Burton translation and mostly corresponds to the same list of stories.

Stories from the Thousand and One Nights with their own trope pages include:

The remaining stories provide examples of: