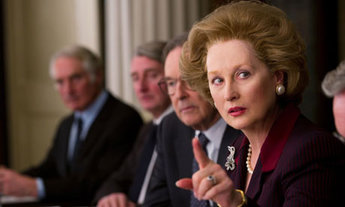 Mr. Tito, I don't "meddle" in politics. I am politics.
"Throughout history, Elizabeth I, Catherine the Great, Golda Meir, Indira Gandhi; these are women you may not wanna fuck, but you definitely don't wanna fuck with them."
— Robin Williams, Weapons of Self-Destruction
Advertisement:

Non-royal women in positions of power are almost always portrayed as very stoic and no-nonsense, at least publicly. Rarely will you find a female president, prime minister, governor, legislator, judge, business executive, or military leader who is presented as indecisive, incompetent, or otherwise "weak." She's also usually not portrayed as corrupt, either, although if she's directing things from behind the scenes, that tends to change.

The reason usually given for this is that women seeking positions of power (as opposed to those who inherit them), both in reality and in fiction, are faced with two unfortunate truths:

Thus, female leaders are generally portrayed as trying to demonstrate their iron will at all times. Indeed, they have to lest they lose all credibility.

Mind you, it's not that she's all iron. In private, she can be quite warm, even loving. Seeing as the camera can take us anywhere, we often get to see it. However, her public does not.

The model for this in the contemporary world is Margaret Thatcher, who was beyond iron to somewhere around titanium towards her (entirely male) cabinet, and defines the "presidential Premiership" in British politics even more than Tony Blair. The nickname was applied to her in an insulting manner by the Soviet military newspaper Red Star in 1976, when she was still Leader of the Opposition, but soon became affectionate. (No mental fatigue, only metal fatigue.)

In most media, she is likely to have Power Hair. In anime, it is more often long hair, in whatever color. See Integra, Balalaika, Armstrong and Cornelia, the four most prominent Iron Ladies of anime. And Margaret Thatcher again, of course.

Such characters are prone to discover a well-hidden maternal instinct towards their subordinates, making this a Distaff Counterpart to A Father to His Men (although usually not military). Compare with Proper Lady, which provides the Iron Lady some foundation. Compare Silk Hiding Steel, where her iron disposition is hidden beneath smiles and Passive-Aggressive Kombat.

Compare/contrast Evil Matriarch and Grande Dame. Also contrast her possible opposites, Stepford Smiler, Misplaced Kindergarten Teacher, and Cute and Psycho, all of whom are more prone to using emotion to get what they want rather than setting it aside as the Iron Lady does.

If she is royal, see The High Queen, God Save Us from the Queen!, and/or The Woman Wearing the Queenly Mask. If she works in a corporate field, very likely to be a High-Powered Career Woman. For her typical Evil Counterpart, see The Queenpin. For the evil and sexy version, see The Baroness. May well have been a Go-Getter Girl when younger. The Lady of War is a comparable action-ready variant (and they can overlap each other if she's active both in the field of battle and politics simultaneously) as well.

Not to be confused with Iron Maiden.

For the 2011 movie about Margaret Thatcher starring Meryl Streep, see The Iron Lady.