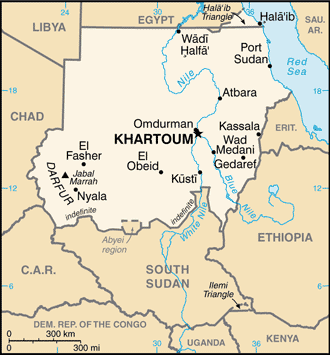 Sudan (Arabic: السودان‎ as-Sūdān), officially known as Republic of the Sudan (Arabic: جمهورية السودان‎ Jumhūrīyat as-Sūdān), is a country in North Africa to the south of Egypt. The Sahara takes up most of northern Sudan, where the population are concentrated along the bank of the Nile. The Nile's two tributaries, the White Nile and the Blue Nile, merge near the country's capital, Khartoum. Although the majority of its 41 million population live south of the Sahara, Sudan is classified as North African because of its cultural link to Egypt. The name Sudan is short for bilad as-Sudan (Arabic for "land of the blacks") and originally referred to a savanna region that borders the Sahara to the south (the savanna does cover a part, but not all, of the titular country).

Before the modern period, Sudan was known as Nubia. Ancient Nubia had a close relationship with Ancient Egypt, particularly after the Second Intermediate Period. Egypt ruled Nubia for eight centuries, losing it during the Bronze Age collapse. Subsequently, Nubia established the Kingdom of Kush and conquered Egypt; the pharaohs of the Twenty-fifth Dynasty were all Nubians. They converted to Coptic Christianity in the 6th century CE and held onto their faith despite the Arabization and Islamization of Egypt after 646. In fact, it's only in the 16th century that they eventually gave in, following civil wars of the successor states of Kush and border raids by Bedouin tribes. The modern Sudanese people are the direct descendant of the Nubians, explaining why so many of them are both Black and Arab. ("Arab" is a cultural identity connected to Arabic language and history, not a "racial" category.) Many people in the border regions have not been Arabized, despite being Islamized. A number of communities regularly speak Nubian languages to this day.

Sudan was conquered by the Ottomans in 1820 and integrated to Egypt, which became a self-governing territory in 1867. The British took over Sudan in 1899, calling it "Anglo-Egyptian Sudan", as it was legally a condominium (a state jointly controlled by two powers) of Britain and Egypt, though of course the Brits had more say. However, they took this after nearly twenty years battling Muhammad Ahmad, a preacher who declared himself Mahdinote A messianic figure who was prophesied to appear alongside Jesus to battle the Antichrist and restore glory to Islam. The British rule over Sudan persisted after World War I and the nominal independence of Egypt in 1922, only ending in 1956 (which is also when the last Brits with Battleships left Egypt after the Suez crisis).

From the Ottoman conquest until 2011, Sudan also included what is now the Republic of South Sudan, whose bloody independence struggle had left a mark on Sudan's recent history since its independence from Britain. Though the majority of the country is Arab and Muslim, the southern part of the country was non-Arab and Christian and, as all similar situations in the region, that tends to make strange bedfellows. The First Sudanese Civil War ensued between 1955 and 1972 and killed between 500,000 to a million people, ending with some concessions for the south, including some sort of self-government. Sadly, the agreement failed to solve the main problems, which brought the Second Sudanese Civil War in 1983. When it ended in 2005, it had claimed up to 2.5 million lives and the south had achieved autonomy and the possibility of statehood in a referendum. The south eventually declared independence in 2011 and started to deal with their own difficulties in their territory. The region of Abyei, in the border, is still contested and currently governed by a UN interim administration, while tensions remain in the bordering states of South Kordofan and Blue Nile, which are politically dominated by groups opposed to the rule of Omar al-Bashir (see below). Sudan lost a lot with the south’s secession, since most of the oil is in there; on the other hand, the pipelines needed to transport them are in Sudan, so they have achieved some kind of agreement to share the revenues.

Concurrent with the second civil war, in 2003, Sudan started a war in the western region of Darfur. Darfur is inhabited primarily by Arabs, but there are several minority ethnic groups, including the Fur people. They accuse discrimination against them, an "Arab apartheid" according to them. These groups rose up against the government, which responded by sanctioning militia of Arab camel herders called the "Janjaweed" to help crush the protests. The militia later consolidated into a paramilitary group, the Rapid Support Forces (RSF), which became an influential force towards the government. The Darfur war is still ongoing (although it has largely subsided since the late 2010s), has claimed 300,000 lives and displaced a further 2.7 million people, and its spillover has affected Chad and the Central African Republic.

There are also several rebel groups who operate in the east, mainly in Kassala, Red Sea, and al-Qadarif states bordering Eritrea. These groups arose during the Second Sudanese Civil War and are united under the umbrella of the Eastern Front coalition. Unlike the South Sudanese rebels, they do not demand a separation — just an equal distribution of resources. The Sudanese government achieved a peace deal with them in 2006, which mandated their representation in the provincial governments of their constituencies.

In 1989 the power was seized by Omar al-Bashir, who installed a legal system based both on The Common Law and the Sharia law. His government had been criticized abroad for its possible connections with al-Qaeda and his responsibilities in the second civil war and the war in Darfur concluded with an arrest order by the International Criminal Court, for the longest time the only acting head of state with one. Since a lot of governments were opposed to the order, he had been able to travel to other "more friendly" countries. From 1993 to 2020, Sudan was also under the United States' list of state sponsors of terrorism (thanks mainly because of Bashir's decision to host Osama bin Laden from 1992 to 1996), which prevented the country from accessing aid from the International Monetary Fund and the World Bank.

In spite of incredible odds, Bashir steered the country for nearly thirty years, until widespread protests beginning in late 2018 ended with the military junta, which included the leader of the aforementioned RSF, removing him from his position in 2019. The main reason cited for the protest was the increase of bread and fuel prices, as the government had no choice but to reduce state subsidy, due to the increasing decline of state coffers as a result of the loss of South Sudan and the continued diversion of funds towards military adventures in Darfur. The United States' designation of the country as a state sponsor of terrorism did not help things either. After Bashir's downfall, the protesters continued to peacefully hound the junta to back down for over six months. Authorities were accused of brutal crackdown in the early days of the protests (when Bashir was still in power) and towards the end

, though in general they were remarkably hands-off, on par with the contemporaneous revolution in Algeria and in contrast to the Arab Spring. In early July 2019, the junta and the main protest movement reached an agreement to set up a three-year transitional period, to pave way for elections in 2022. However, in late October 2021, the military overthrew the transitional Sovereignty Council, seizing power on the grounds of alleged actions by the civilian-led government that were supposedly risking civil war. The new junta then promised elections would now happen in 2023, but time will tell.

This is also the country that sparked a controversy when a teacher supposedly named a teddy bear "Muhammad", although it was actually one of the students who did it.

In a more positive note, Sudan has a rich culture and is a high producer of writers in the Arab and African world. The movie The Four Feathers happens here, too.

As a last curious note, the country has a border dispute with Egypt not of wanted territory, but of unwanted territory: the Bir Tawil trapezoid, which must be officially the most undesired patch of land in the world — the thing is, it is actually an unfortunate byproduct of both countries' squabble over the Hala'ib Triangle to the east. Should one country claim Bir Tawil, it will automatically lose its share of Hala'ib's natural resources... not the least of which is its sizable reserves of oil.note  Due to confusion over the 1899 and 1902 boundaries, one line gives the much-larger, much-richer, and much-more-populated Hala'ib Triangle to Sudan and the Bir Tawil to Egypt, while the other gives the Hala'ib Triangle to Egypt and Bir Tawil to Sudan. So if either country claimed Bir Tawil they'd be supporting the line that gives the other country the much more desirable Hala'ib Triangle (which both have a case for owning) — and, of course, no other country has the grounds to claim Bir Tawil or the means to enforce it. 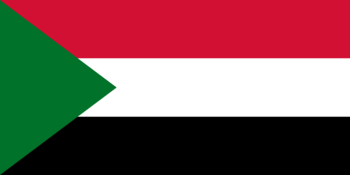 Like most flags in the region, Sudan uses the Pan-Arab colors for its flag. The red, white and black stripes represent struggle and sacrifice, peace and hope, and the Sudanese people, respectively. At the hoist side is a green triangle, symbolizing Islam and the fertile land.
Emblem of Sudan 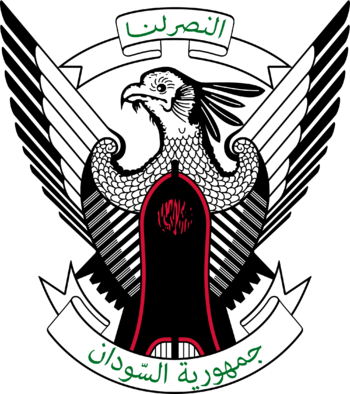 We are God's soldiers, soldiers of homeland
If called for redemption, we did not betray
We defy death upon ordeals
We buy glory at the most expensive price
This land is ours
May our Sudan live, an edifice among the nations
O Sons of the Sudan this is your symbol,
carries the burden and protecting your land
Government Miscellaneous