Manga / Kiss of the Rose Princess 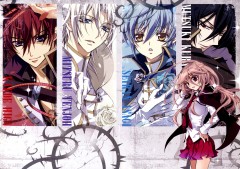 Anis and all her boys, not that she wants them.
Kiss of the Rose Princess (Barajou no Kiss) is a Shoujo manga by Aya Shouoto that ran in the magazine Asuka from 2008 to 2011, compiled in 9 volumes. This would be your bog standard Shoujo manga except for the author's fondness for subverting, inverting, genderflipping, and generally tossing about the tropes common to the genre.
Advertisement:

So you think your father is a Manipulative Bastard out to ruin your life? Anis Yamamoto would like to compare notes if you wouldn't mind.

First her father straps her with a choker that won't come off and he claims is a amulet of protection. When said choker finally does come off (through no efforts of her own) she finds herself saddled with four teenage boys calling themselves her 'Rose Knights,' who use her blood to fuel their magic, a vague prophecy of doom, and then her father decides to come home.

Anis can summon the boys via color coded cards and order them to do her bidding. They must do what she says or get beaten with rose thorns. Downside to having a quartet of hot guys who have to do your bidding or face rose thorns of doom is that said magic is powered off her blood. (This is strongly implied to be the only reason Anis doesn't run around trying to take over the world.) Her father is trying to replicate the Rose Contracts for reasons unknown and likes to mess with Anis's head on the side.

It was licensed for English release by Viz Media in 2014.

Examples of tropes found in Kiss of the Rose Princess: