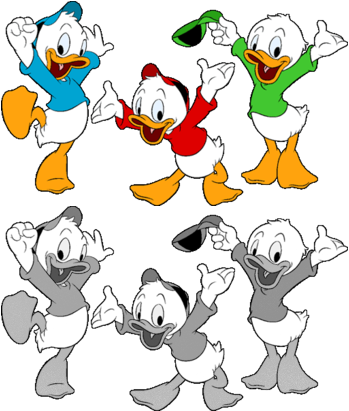 When a creator of a work introduces a large number of characters at once, such as at the beginning of a work, they have to find a way to distinguish them and make them memorable in the audience's mind. Some of the ways they do that is to give them memorable names or personality traits. But perhaps the easiest way ties to human's strongest sense: our sight. By giving each character a specific Color Motif, the audience can quickly come to associate one color with that character and tell the characters apart with only a glance.

Note that this is not always the only way to tell the characters apart. It is usually just one of many.

Bright, contrasting colors, particularly primary colors, are common. Regardless who they're assigned to, you can almost always count on a Red and a Blue to appear. Green and Yellow are also common. To round out a Five-Man Band after using the four primary colors you might see Pink for The Chick. If The Hero doesn't get Red or Blue, then they probably get White or Black with the four supporting members doing Chromatic Arrangement. Though as part of the group Black has an odd tendency to swap with Green too. Purple, Orange and other colors are less common unless you have enough units for a full Rainbow Motif or more. Metallic colors like Gold and Silver are usually reserved for the badass Sixth Ranger, as with Black and White if they haven't been used yet.

This trope can come into play with Palette Swap (colors used in Video Games), and how to tell characters apart with Only Six Faces. Often applies to Superhero Team Uniforms.

A Super-Trope to Chromatic Arrangement and Color-Coded Secret Identity. A Sub-Trope of Colour-Coded for Your Convenience.