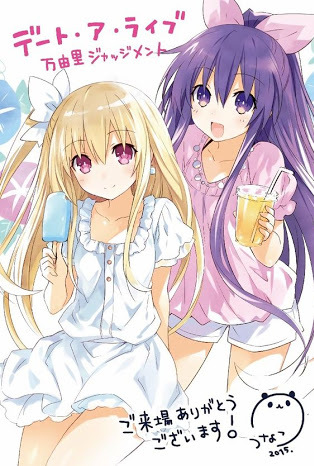 Even similar stories can take their own path.
Even a similar story can take it's own path. Shido and Mana are amnesiac siblings living with their friend Kotori, however the past catches up to Shido when he nearly runs into a space quake, and his world changes as one girl asks... "Are you here to kill me?"
— The Story Summary
Advertisement:

is a Date A Live AU Harem Fan Fiction written by Tohka Yatogami.

Thirty years ago, a new type of natural disaster known as the Spacequakes begin plaguing the world, killing 75% of Humanity, and destroying many countries while mankind could do nothing but run from the chaos. In the present day, Shido and Mana Takamiya are a pair of amnesiac siblings who live in the Itsuka household, alongside their honorary sister, Kotori Itsuka.

On the first day of his High School Freshman year, Shido's entire school is forced to evacuate due to an incoming Spacequake, only for him to quickly discover that his sisters might still be waiting at the Diner they promised to visit after school, rather than taking shelter like they should be. He attempts to go rescue them, but in the process doing so, he nearly rushes into the radius of a Spacequake, and discovers that these natural disasters are caused by none other than... teenage girls!?

As the unexpected reality and truth stands before him, the journey to discovering his forgotten past begins, and his world is changed forever by one of these very girls asking him the simple question of: "Are you here to kill me?"

On April 10 2020, a reboot/rewrite by the author Date A Live: Altered Timeline was posted on Fanfiction.net.

Date A Re:Live provides examples of: