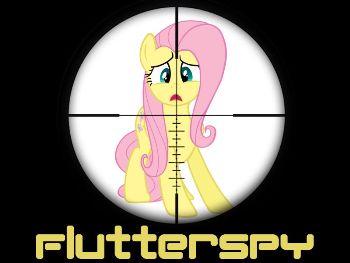 Fleur de Lis: Elite young fillies and colts from Fancè are sometimes trained to serve Princess Celestia in... ways not greatly publicized. We work in the shadows, protecting Equestria from threats from without, and from within. We are... the Agents Secret.
Fluttershy: I've never heard of them.
Fleur de Lis: Oui. There is reason for that.
Advertisement:

is a My Little Pony: Friendship Is Magic comedy fanfic by Kavonde that's available from Fimfiction.Net. As you've probably guessed from the Pun-Based Title, it takes Fluttershy, the gentlest and most peaceful member of the Mane Six, and plunges her into the world of Tuxedo and Martini Spy Fiction.note Technically, this is more of a Bathtub Gin Flavored story, since the main character is a civilian who's mixed up in a spy adventure.

Rarity goes to Canterlot to display her latest fashions at the first annual Equestrian Fashion Forum, which is sponsored by Fancy Pants. She persuades Fluttershy to come "out of retirement" to model the new designs, despite her bad experience last time. One of the other designers is Miss Worthy, who brings three models with her (the rules allow only one). A resident of Manehattan and "a relation of old royalty", Worthy is also a bigoted Jerkass who insults Rarity because she takes a dim view of "mud ponies" from rural villages. Although the Forum isn't a competition and Rarity already came with a new set of designs, she resolves to come up with even better ideas just to outdo Worthy.

Fluttershy is surprised, but an even bigger shock is headed her way. While she and Rarity are taking a carriage back to their hotel, it's hijacked — and Fluttershy recognizes the perp as Red Adder, one of Worthy's models! Red Adder attacks her — and then Fancy Pants' girlfriend, supermodel Fleur de Lis, comes out of nowhere to save her! Later, Fleur explains that she's actually a secret agent working for Princess Celestia, and she's here because Fancy Pants and Rarity are both in danger — sort of. Despite his upper class roots, Fancy Pants believes in equality and egalitarianism, and his enemy Worthy is using the fashion show as "an opportunity to prove the nobility's superiority, and to win hearts and minds from Fancy's cause." To help accomplish this, she plans to destroy Rarity's career with the help of her "models", who are actually three highly-trained Ninjas. And since Fluttershy is now involved, Fleur de Lis enlists her as an ally.

So all Fluttershy has to do is overcome her natural resistance to modeling and somehow help defeat Worthy and her vicious ninjas, all while keeping an increasingly suspicious Rarity in the dark.