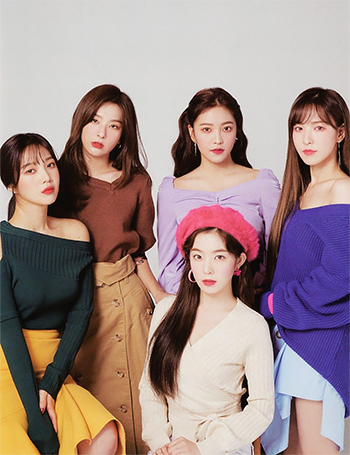 Red Velvet is a South Korean Girl Group formed by SM Entertainment. They debuted with the single "Happiness" on August 1, 2014. Their image is split into two concepts: strong and feminine, represented by "Red"; and soft and sensual, represented by "Velvet." Originally consisting of four members, member Yeri was added to the group's line-up in 2015.

In July of 2020, the group's first sub-unit, consisting of members Irene & Seulgi, debuted with a mini album titled Monster to overwhelming success and critical acclaim. In 2021, Wendy and Joy made their solo debuts with the respective mini albums Like Water and Hello (안녕).

They're known for their great live performances and outstanding versatility. While Wendy is the powerhouse vocalist, and Seulgi and Irene are the most celebrated dancers, every member has a key role in the group and they're all known to be above average in dancing, singing and visuals.

Tropes that apply to Red Velvet