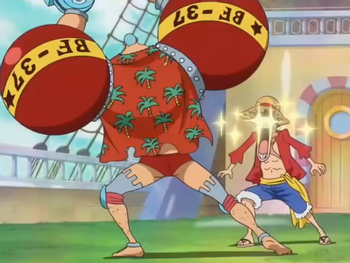 With sparkles and a jaw drop thrown in for good measure.
Advertisement:

WOW! LOOK AT THIS ARTICLE! It's just so awesome and well made! I've never seen anything like it!!!!

Different people have different standards. Some people are rather complacent while others are rather picky. This holds true in fiction as well. Various characters will be impressed or surprised by stuff in various degrees. But generally, the average character's standards will likely be close to the audience's as authors will try not to make their characters seem notably wowed by something unless they're pretty sure the audience will be impressed as well. With good reason too, as the audience can easily get annoyed if characters keep gushing at things the viewer isn't all too impressed by. It can even strain Willing Suspension of Disbelief.

But then you have these characters. These characters seem to be so Easily Impressed that if you were able to get a spinning coin to stop while standing, they'd be BLOWN AWAY. Simply put, characters who are Easily Impressed are ones who seem to have so low standards that they regularly get dazzled by things both the other characters and the audience don't find too amazing. To the point that it can become a notable trait of theirs. This trope is normally used for comic relief or to establish a character as whimsically naive.

Character archetypes that frequently display this include The Ditz, Idiot Hero, Kid Hero, The Fool, Sidekick, Nice Guy, Genki Girl, All-Loving Hero, Nerds, Sheltered Aristocrat, Wide-Eyed Idealist, Plucky Comic Relief, Butt-Monkey, Funny Foreigner, Amusing Alien, Dork Knight, Endearingly Dorky, The Pollyanna, Mooks, Muggles, Cheerful Child, and the Cloudcuckoolander. Intrigued by Humanity also tends to lead into this as a character may end up going bonkers over anything that has to do with human customs.

Character archetypes that (almost) never display this include the Anti-Hero, The Snark Knight, The Stoic, Grumpy Bear, Deadpan Snarker, Stepford Snarker, The Napoleon, Jerkass, Smug Snake, characters with the A God Am I complex, Know-Nothing Know-It-All, Insufferable Genius, The Eeyore, and Abusive Parents. If a bunch of characters or people are fawning over something suspicious or absurd, expect there to be an Only Sane Man to try to talk some sense into them. A character that's Obfuscating Stupidity may include this in their act. It's hilarious if a Jerk with a Heart of Gold tries to suppress this.

Things can get quite interesting if the characters exhibiting this are fawning over a Humble Hero or characters who want people to Stop Worshipping Me or hate Unwanted False Faith. A Glory Seeker, on the other hand, LOVES these characters.

Compare with Mundane Object Amazement for when this happens because the person who's Easily Impressed doesn't realize that the thing they are gushing over isn't exceptional by the native's standards. Contrast with Worthless Yellow Rocks for when the opposite happens. When it's invoked, that's This Is My Boomstick.