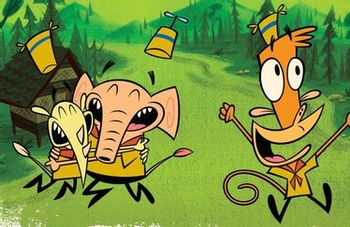 It is about the adventures of Lazlo, a spider-monkey; Raj, an Indian elephant, and Clam, an albino pygmy rhino who, along with other campers like Edward, a platypus, Chip and Skip, a pair of dung beetles, and Samson, a guinea pig, go to Camp Kidney for scout-like campers. The Bean Scouts are under the direction of Scoutsmaster Lumpus, a moose and his second-in-command, Mr. Slinkman, a banana slug. To Lumpus' dismay, Lazlo's search for adventure around the camp and obliviousness to danger makes him uncontrollable. Occasionally, the local girl scout equivalents, the Squirrel Scouts, show up too, and sometimes they're friends, sometimes they're enemies.

Although considered a Tough Act to Follow compared to Murray's previous show, critical reception was decent, with some hailing it as one of the better shows to air during Cartoon Network's Network Decay in the mid-to-late 2000s, alongside Chowder and The Marvelous Misadventures of Flapjack (which most of the Lazlo crew went on to produce). Some have compared its humor being similar to SpongeBob SquarePants as well as using a similar audio-track. It has a considerable fanbase, and the series has won three Emmy Awards and three Pulcinella Awards, and was also nominated for another Emmy and an Annie Award. Its hour-long movie special "Where's Lazlo?" won an Emmy in the "Outstanding Animated Program (for Programming One Hour or More)" category. Camp Lazlo was released in HD remasters partially on Boomerang's streaming service in 2018, completing the HD release of the show in its entirety in June 2019.

Example of:
Crying a River