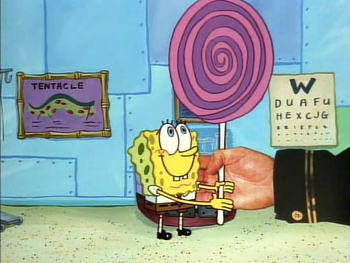 You were a brave, good patient, have a lollipop for your way out!
Advertisement:

A great majority of people, especially children, are not the biggest fan of hearing they have to go to their doctor appointment or to those pesky dentists. Maybe it's that powerful Pine-Sol smell, or that toddler that won't shut up in a waiting room full of strange people with unusual clothes, and possibly an unpleasant thing like a flu shot at the end. But, if they be a brave, good little patient, why not reward the little champ with a lollipop (or Oreos) as a reward.

Of course some parents are up in arms about this, seeing the unhealthy treat as anathema to the point of a doctor. Supporters and some doctors argue that it's not a common occurrence and the kid deserves to be rewarded with the fruity candy on a stick. The argument is slowly pushing this into a Dead Horse Trope as more and more doctors switch to stickers instead of sweets as a reward.

Barbers are also known to hand out lollipops and other types of candy to children after they get their fresh hair cut.

Dentists usually give small toys or stickers to children after a check-up rather than candy for obvious reasons.

If an adult gets some candy it's often a sign that either the doctor is really old-fashioned or the adult has an immature side.

The Trope Codifier is most local blood banks, as they will give the blood donors sugary rewards (Candy, Cookies, and Juice) not only as a reward for potentially saving a person's life, but also raise the donor's blood sugar, to prevent shock, fatigue, mild confusion, and fainting.