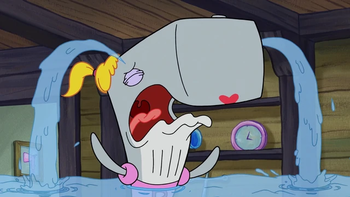 Remember that she's already underwater.
This is the story of a girl
Who cried a river, and drowned the whole world
— Nine Days, "Absolutely (Story of a Girl)"
Advertisement:

We all know the expression "to cry oneself a river" is a figure of speech, right? Well, not always in Fictionland. This is for when a character's tears could at least fill a bathtub, but sometimes they could fill an entire ocean.

It's usually a gag trope, used to perhaps bring some levity to an otherwise sad scene, but other times it's exploited by having people actually swim in the tears or whatever.

Sometimes, the character doing the crying is huge (a giant, a large dragon, etc) so you have a good reason for their producing that much saltwater. Other times, they're regular-sized but cry that much anyway, due to Rule of Funny or because they're just that sad or whatever the case may be.

Not to be confused with Ocular Gushers, which involves tears spurting out like a fire hydrant, but doesn't necessarily involve the tears accumulating in a large pool. The two do often occur together, though. Compare Swiss Army Tears. May result from Giant's Droplet, Human's Shower.