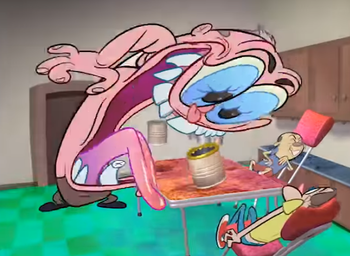 "EAT THE FUCKING FAAAAAAAAAAAAAACE!"
"Here's the rule: once we open this can... we have to eat whatever's in it!"
—George Liquor (American) to Slab and Ernie
Advertisement:

Cans Without Labels is a crowdfunded cartoon created by John Kricfalusi (of Ren and Stimpy fame) that was in production for much of the 2010s and released in 2019.

The cartoon stars George Liquor (American) and his nephews Ernie and Slab, who had previously starred in Kricfalusi's web series The Goddamn George Liquor Program. In this outing, Ernie and Slab are having lunch and inquire as to what all the cans on the table are. George explains that they are cans without labels, which he buys cheap. Things go south when the kids discover how disgusting the contents of the cans are; specifically, a can that Uncle George claimed to be beef stew actually has a human face inside of it. George insists on making them eat it anyway (despite their extreme desire not to do so), and after a fit of anger, he goes off to take a bathroom break, warning his nephews that "that face better be gone" when he gets back. The rest of the short is spent on Slab and Ernie trying to find ways to get rid of the face without eating it.

The Kickstarter project for the short was launched on July 18, 2012

and ended on August 17, exceeding its goal by having made $136,723. The estimated competition date was February 2013, but this deadline came and went. And so months pass. Then years. Cans Without Labels would come to be seen as yet another example of Kricfalusi's failure to meet his own deadlines, with both this and his failure to repay all of the backers generally discussed more than what little of the short itself was completed. Kricfalusi would later announce that the short was finally completed in August 2017, but it wouldn't be released to backers until May 2019 two years later.note Well, the ones that had the tiers with the DVD, anyway.

The DVD featuring the finished short and a number of special features, including a scrapped Ren & Stimpy short that was supposed to be shown in front of The SpongeBob Movie: Sponge out of Water, is available from Kricfalusi's online store through his Shopify account.