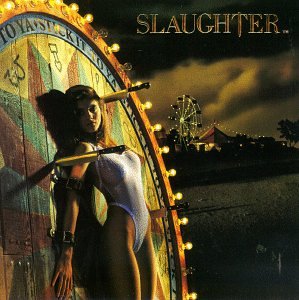 Do Not Try This at Home. Try it at school!
"My mother was a show thrower. She could throw knives all around a person and never harm a hair. She never missed."
— Gleam, The Victors Project

The old carnival routine where a person (usually a Lovely Assistant) stands against a board as a target (sometimes a spinning wheel to ramp up the danger) and the throwing knives are supposed to hit on either side of the target, which may lead to a Knife Outline.

Usually faked when done in live action, even where the possibility of error is supposed to be realistic; too many things can go wrong trying to do it for real, and lovely assistants in Stripperiffic outfits aren't easy to come by these days...

By spinning the wheel used for the knife-throwing act, Luigi somehow summons the knives that strike it. This reveals a gem.

By spinning the wheel used for the knife-throwing act, Luigi somehow summons the knives that strike it. This reveals a gem.