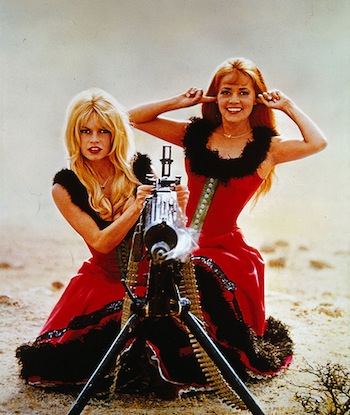 Check out THESE bombshells.
Advertisement:

On the eve of The Mexican Revolution, Maria (Bardot) has just lost her Irish terrorist father to one of his own explosions. She wanders aimlessly until she stumbles upon a hybrid circus/vaudeville troupe, where she meets another woman named Maria (Moreau). They agree to team up and form a theatrical duo. Some time later, they meet a revolutionary named Flores (George Hamilton), who's fighting to take down the dictatorial government of the (fictional) country of San Miguel. Moreau!Maria falls in love with him, but he's shot not long after. She promises to carry on his revolution, with the help of a reluctant Bardot!Maria.