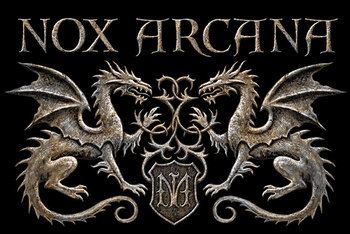 Nox Arcana, a Gothic Classical group creating self described music from the shadows, formed in 2003 as a collaboration between gothic fantasy artist Joseph Vargo (of ex-Midnight Syndicate fame) and musician William Piotrowski. The group's first album Darklore Manor introduced the music world to what would become Nox Arcana's signature style — a darkly beautiful, but wonderfully eclectic sound that centered around the brilliantly realized backstory of the album's concept.

With the albums being published by Vargo's company Monolith Graphics, the group put out new album after new album, each with an entirely new concept. Concepts ranged from the works of H. P. Lovecraft and Edgar Allan Poe to dark carnivals, Transylvania, pirates, fairy tales, and (surprise!) four Holiday albums.

In 2009, the band put out two more albums (Blackthorn Asylum and a second Holiday album, Winter's Eve), within a few months of each other. In 2010, House of Nightmares, the band's second collaboration with Buzz-Works was released. As of 2019, twenty-two albums have been released, with the most recent being The Haunted Symphony.

Perhaps the most unique aspect of Nox Arcana's work is that it is not simply music. The music is only one part of the whole (albeit the most important part). The band creates stories that tie in with the album's concept, often including vocals and sound effects that help to tell the story. Vargo's artwork adorns the album covers and booklets. On the official website, an interactive area known as "The Arcanum" allows listeners to enter the world of the music through solving puzzles hidden in the CDs. The Dark Tower and Darklore Manor have books that tie into their stories, and Monolith Graphics released in 2018 a point-and-click puzzle game that ties into Theater of Illusion called The Cabinets of Dr. Arcana.