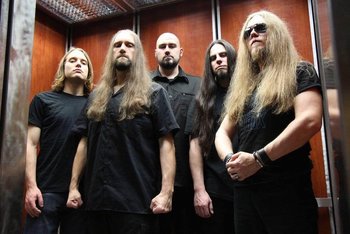 Novembers Doom (no apostrophe) are an American death/doom band from Chicago, Illinois. Characterized by their atmospheric yet riff-heavy compositions, introspective lyrics, and the instantly recognizable one-man Soprano and Gravel vocals of frontman Paul Kuhr, they have been a band for almost three decades, making them one of the longest-running American death/doom bands. While not as successful as some of their peers, they have garnered a very devoted cult following over the years in many parts of the world, and are known for having one of the most devoted fanbases in underground metal.

The band was formed in 1989 under the name Laceration. They began as a more straightforward death metal band, but changed to their current name in 1992 as their sound evolved to incorporate more doom metal elements, as they felt it would fit their sound better. Their debut release was a two-track EP entitled Ripping Avulsion, which was their only finished recording with their original name and was eventually re-released as the last two songs on their debut album Amid Its Hallowed Mirth, which came out in early 1995 to positive reviews. Garnering comparisons to European death-doom acts such as Paradise Lost, the group decided to take a break to add more melody and outside influences to their sound in order to diverge from their competition. This resulted in their sophomore album Of Sculptured Ivy & Stone Flowers, which received near-universal acclaim and is often regarded as not only the band's best album, but one of the best albums in the death/doom genre, period.

Following up on the success of their second album, they released their third record The Knowing less than two years later in late 2000, continuing in the same vein as its predecessor while also featuring slightly more frequent clean vocals from vocalist Paul Kuhr and minor symphonic elements. Their fourth album To Welcome the Fade was released in 2002, adding more atmospheric songwriting and strong gothic metal influences, resulting in their most emotionally raw record up until that point. 2005's The Pale Haunt Departure marked a minor but significant change to their musical direction, featuring more polished production, crunchier riffs, and faster tempos, resulting in a more traditional death metal sound, but still keeping doom metal elements such as baritone clean vocal sections.

Since then, the band have continued to experiment with different influences while still keeping to their roots, releasing a further five albums from the late 2000s to 2010s. To showcase their death metal side a little more, Paul Kuhr and former guitarist Steve Nicholson reunited to form a side project called These Are They, and the former also has a progressive metal band called Subterranean Masquerade. He also provided the growls for the EP In Mournings Symphony by the group Em Sinfonia, a side project of Broken Hope guitarist Brian Griffin. In addition to his work in the band, Paul is also a freelance designer, and has designed cover art and album layouts for many other death metal bands, including Jungle Rot, Gorguts, Necrophagia, Monstrosity, and Macabre.

In 2007, they published an autobiography entitled Novembers Doom: The Wayfaring Chronicles, which also contained explanations for the lyrics of all of their songs up until that point.

Tropes that apply to the band, their music, and its members: