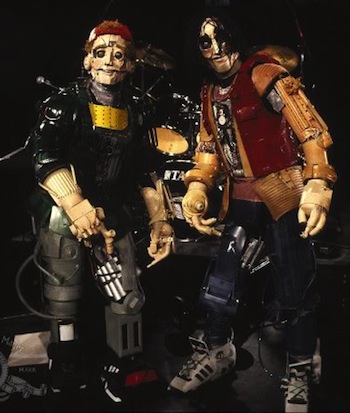 Homemade alien robots are most excellent.
William: To power the suit ... sir, the technology doesn’t actually exist. …
Obadiah Stane: Tony Stark was able to build this in a cave! With a box of scraps!
— Iron Man
Advertisement:

Who says you need a billion-dollar grant to build cool inventions? As every wacky scientist knows, advanced inventions can be, in the words of Robert Zemeckis, "built in somebody's garage". Want your own spaceship? Shrink ray? Time Machine? The spare parts lying around in your basement should be sufficient.

Of course, Homemade Inventions won't be perfect. Due to being built out of various mechanical parts, they will have a "cobbled together" look. (If this occurs in a film, you can bet the art department had a lot of fun with it.) Sometimes, they'll work in a far more elaborate and convoluted manner than their purpose would seem to require; their power source may be as humble as the family pet in an exercise wheel. Still, they will nearly always work and, when they don't, they'll fail spectacularly. These inventions will probably be created by the Bungling Inventor, the Weekend Inventor, The Professor or the Teen Genius. More than half the time, these inventors will neglect to make sure that they know how to reconstruct their inventions.

And, of course, the inventors won't try to use their unbelievable science-defying constructions to solve the problems of the world and help mankind or exploit them to gain fame and riches.

In certain settings however, these homemade inventions are weapons. The reasons greatly differ from setting to setting, from proper firearms being a rarity in a post-societal collapse or a Gadgeteer Genius / The Engineer whipping up something to defend themselves from an opponent, dangerous and life-threatening or otherwise. The construction of these weapons, sometimes range to somewhat plausible to outright impossible.

See also: Bamboo Technology, MacGyvering and Homemade Flamethrower. Compare Gadgeteer Genius and Doom It Yourself. Related to and may overlap with Improvised Weapon. For the fantasy equivalent, see Improvised Golems.