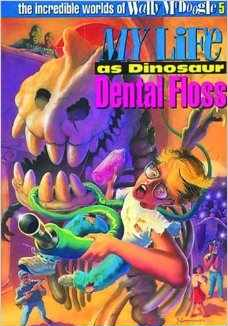 Believe it or not, being cornered by the news, an Animal Wrongs Group, a SWAT team, and the schoolyard bully around a T-Rex skeleton is only scratching the surface for what our hero gets himself into.
Advertisement:

The Incredible Worlds of Wally McDoogle is a Christian book series by Bill Myers (also known for his work on McGee and Me!), which follow the strange adventures of the titular Wally McDoogle, the world's most accident-prone kid, and his friends, the greedy Wall Street and Big Eater Opera, as they go on wild adventures either at home or abroad.

The books also include B-plots involving the superhero stories Wally writes on his trusty computer Ol' Betsy, a Christianity-derived aesop the three learn, and a heaping helping of amusing injuries along the way.

The series ran for 28 books, during which Wally has gone to summer camp, saved his town, been a stuntman, turned invisible, wrangled a giant tarantula, became a cheeseburger...yeah, it's that type of series.

For more works by the same author, see Secret Agent Dingledorf and His Trusty Dog Splat.