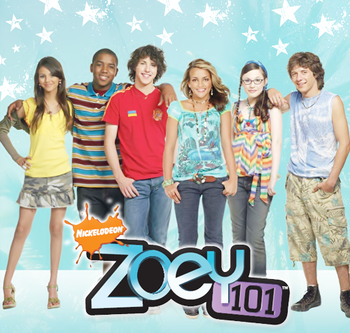 ♪ If you wanna play, come and play today
Let's just get away, yeah ♪
Largely famous as Britney's sister's show. It premiered on January 9, 2005 and ended on May 2, 2008.
Advertisement:

Pacific Coast Academy was previously an all boys school, but has just begun admitting girls. Among that first class of girls is one Zoey Brooks (Jamie Lynn Spears), who has to contend with the boys when it comes to any privilege among the school. But of course, having a gender-integrated school proves to be appealing for both sides and it basically becomes a college-type atmosphere but with teenagers.

As time went on multiple characters were replaced. Dana left, and was replaced by Lola Martinez (Victoria Justice). Later, Nicole left, which allowed Quinn to move in with Lola and Zoey. Finally, Chase ended up leaving for a semester and was briefly replaced by James Garrett (Austin Butler).

Created by Dan Schneider, the show is the origin of the Nick Verse, created when Drake Bell showed up As Himself. Victoria Justice would later take part in another Schneider comedy, Victorious.

Nowadays, the show tends to be seen in a positive light—the only major criticism detractors have is that Zoey herself is too perfect, and even then, many episodes don't focus on her. It's also unique as the only major show in the Nick Verse to not have a Laugh Track or be shot on a stage; it was shot on location at Pepperdine University in Malibu, California.

featuring Michael finding Chase and giving him Zoey's DVD (from the episode Time Capsule) and allowing him (and the fans) to know just what exactly Zoey had said about him on her DVD ten years ago. Given how the episode had premiered on September 18th 2005, this would make it exactly ten years from when Zoey told Chase he would be allowed to find out.