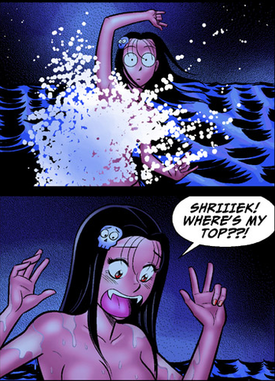 A character performs an impressive dive into a lake, swimming pool, or other body of water. The audience is amazed at the diver's prowess... so why are they staring and covering their children's eyes?

Hilarity Ensues when the diver notices their swimsuit floating leisurely on the pool's surface.

According to Rich Hall, this embarrassing phenomenon is known as detruncus and may happen to either a man or a woman. Women are more likely to lose their tops, but not always.

A subtrope of Wardrobe Malfunction. Related to Gone Swimming, Clothes Stolen. Invokes Naked People Are Funny when used for comedy.